Count Dracula (Full Name Vlad Dracula Țepeș and also known as Dracula and referred to as the Count for legal reasons, as Universal's exclusive license for Dracula did not expire in the United States until 2001) is a vampire from the world of Castlevania. He is Alucard's father and the archenemy of Simon Belmont, and, like every other video game based character on the show, is very loosely based on the main antagonist of Castlevania and many of its sequels.

Despite being based on the main villain in the Castlevania franchise, the Count very rarely played a major role in the TV series and was often in a more subservient position.

Like a traditional vampire, the Count has the ability to transform into a bat; however, his bat form looks different from episode to episode. He is also skilled in necromancy and can animate and control undead creatures.

He was the officiant at the wedding of Simon Belmont and Mother Brain. ("Mr. and Mrs. Mother Brain")

Like many characters, he was redesigned for the third season, with a different color scheme.

The Count in vampire form

The Count in bat form 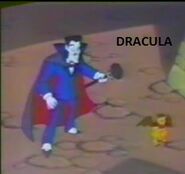 The Count in vampire form ("Return to Castlevania")

The Count in bat form ("Return to Castlevania") 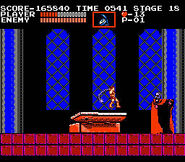 The Count/Dracula as he appeared in Castlevania, doing battle with Simon Belmont

The Count/Dracula as he appeared in Castlevania II: Simon's Quest, preparing to do battle with Simon Belmont

The Count/Dracula as he appeared in Castlevania III: Dracula's Curse, in all three of his forms
Community content is available under CC-BY-SA unless otherwise noted.
Advertisement