Edit
watch 01:36
We're Getting Mutants in the MCU - The Loop
Do you like this video?
Play Sound

Dr. Wily is a character in the cartoon continuity of Captain N: The Game Master. He is based on Dr. Albert Wily, the main antagonist of Mega Man and its sequels.

Dr. Wily is a member of the Forces of Chaos. He works for Mother Brain along with King Hippo and Eggplant Wizard, though he usually works on his own projects or assists Mother Brain directly rather than working with her less intelligent minions. He is voiced by Ian James Corlett.

Dr. Wily is a mad scientist from Megaland and the primary foe of Mega Man. He invents many weapons and devices for the villains, but his main forte is creating killer robots. He also has a rivalry with Dr. Wright and was responsible for reprogramming his original Robot Masters.

Dr. Wily doesn't appear in the comic. He along with Mega Man, were allegedly planned to appear in a later issue before the series was cancelled. 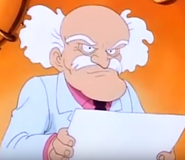 Dr. Wily as he appears in Seasons 1 and 2 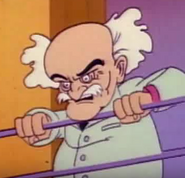 Dr. Wily as he appears in Season 3
Community content is available under CC-BY-SA unless otherwise noted.
Advertisement