King Charles is the king of Videoland and the father of Princess Lana and Prince Lyle. He is voiced by the late Long John Baldry.

King Charles ruled over Videoland until he was banished to the Mirror Zone by Mother Brain. When this happened, his Mirror Image Opposite entered Videoland.

Lana and the N Team attempted to rescue him from the Mirror during "In Search of the King," but this was all a ruse by the Mirror King Charles to get the rest of the Mirror N Team into Videoland so that he could accomplish his own evil goals. It is never made clear if the Mirror King has an affiliation with Mother Brain of any kind. In either event, the N Team escaped the Mirror World, albeit destroying the warp into and out of the world in the process, leaving the King trapped inside. He vowed to find another way out someday, though.

He reappeared in the episode "Gameboy" via satellite, with Lana hoping that he would use an interdimensional warp to come home. However, he sent Gameboy in his place, feeling Gameboy would be better help for the N Team than he would.

He was mentioned in "The Trouble with Tetris," with Lyle and Lana optimistic about his possible eventual homecoming. Lyle wanted to begin ruling Videoland in his father's place, but his confidence was shaken when he was unable to stop King Hippo and Eggplant Wizard from stealing his Tetris key. Fortunately, with encouragement from Gameboy, he was able to fight back and foil Mother Brain's plans. Later, he opted not to rule Videoland alongside Lana, deciding it was best to stay and protect the world of Tetris.

The King was also mentioned in "Pursuit of the Magic Hoop," with the N Team wanting to use a wish through the Magic Hoop to bring the King home. Lana had the opportunity to do this at the end of the episode, but ended up using the wish for another purpose.

Why the King is so old is not mentioned on the show, and it is possible he may not be a biological relation to Lana.

King Charles never directly appears in the comic, though he is still missing. He is frequently mentioned throughout the series, and Uranos impersonates the King in The Happy Zone to capture Lana.

"Deschain" is the most common surname used for King Charles and his family in fan fiction; his surname is never given in the cartoon or the comic. This surname comes from Roland Deschain, the protagonist of Stephen King's The Dark Tower series, which Mark Moore was reading at the time that he was writing his Captain N fan fiction.

Lana and her father 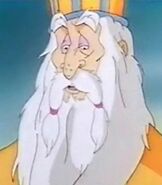