Malkil is an evil wizard who lives on Excalibur. He is loosely based on the main antagonist of the Wizards & Warriors series.

Malkil once helped Mother Brain take over the Palace of Power by trapping the N Team in the Nightmare Zone, but Princess Lana turned the tables and helped the team escape from the Nightmare Zone by tossing a magic apple into his mouth. 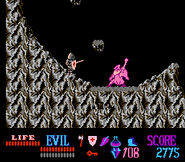 Malkil as he appeared in Wizards & Warriors, doing battle with Kuros

Malkil as he appeared in The Power Team
Community content is available under CC-BY-SA unless otherwise noted.
Advertisement