Mega Girl is essentially the female counterpart of Mega Man.

Mega Girl was built by Dr. Wright to be a friend to Mega Man. After she was created, Mega Girl took the three challenges in order to be worthy of becoming human through the Warp of Life and succeeded.

Mega Girl was then presented to Mega Man as a friend during his birthday party, but was rejected by the latter. She followed him, however, when he decided to pursue the Warp of Life to become human. When he and the rest of the N Team get caught up in having fun in the Pleasure Zone, she informed them that the fun they were having was supposed to prevent them from wanting to leave, only to be restrained by the clown who tried to persuade them otherwise.

Mega Man believed Mega Girl, and saved her from the clown. Despite being grateful for her information, he blew her off when she insisted that he should forget about his quest.

Mega Girl continued to follow the N Team and nearly made it onto the island with them, only to be chased by a Warp Whale. After being discouraged from trying to save her, Mega Man chose to do so at the cost of his goal, only to learn that saving her was the final challenge, and learning that she too had entered the Warp of Life. After passing through the Warp of Life, Mega Man became friends with Mega Girl.

Later, Mega Girl was one of the guests at a ball thrown at the Palace of Power.

Mega Girl is considered by some viewers to be the Captain N version of Roll, Mega Man's sister. In the original series, Roll was a housekeeper who could still hold her own in combat (especially as shown in the Ruby-Spears cartoon). 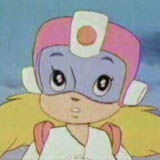 The original Roll
Community content is available under CC-BY-SA unless otherwise noted.
Advertisement