Mother Brain is a character in the separate cartoon and comic book continuities of Captain N: The Game Master as well as the main villain. The two versions of the character share a lot of personality traits and some backstory. She is very loosely based on the main antagonist of Metroid.

Mother Brain is a villainess who lives on the asteroid-like spacecraft known as Metroid, from which she hatches plots to conquer Videoland. She is voiced by the late Levi Stubbs, who was probably best known for being the lead singer of 1960s R&B group the Four Tops.

Mother Brain is vain, intelligent, devious, and determined to overthrow Princess Lana and replace her as the ruler of Videoland. She leads the Forces of Chaos, a team of villains that includes King Hippo, Eggplant Wizard, and Dr. Wily. She relies on King Hippo and Eggplant Wizard to carry out most of her plans, though they often anger her with their stupidity and incompetence. Why she bothers to keep employing them is never explained.

In spite of her scheming and villainous nature, Mother Brain has a softer side that surfaces on occasion. She likes having her appearance complimented, and when Simon Belmont falls in love with her and helps her conquer Castlevania to prove that his feelings for her are genuine, she acts deeply touched. ("Mr. and Mrs. Mother Brain")

In the comics, Mother Brain is vastly wealthy, and once used her resources to bribe Samus Aran into working for her temporarily. ("Money Changes Everything")

Mother Brain as she appears in Season 3 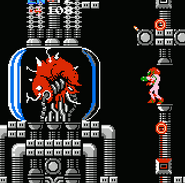 Mother Brain as she appeared in Metroid